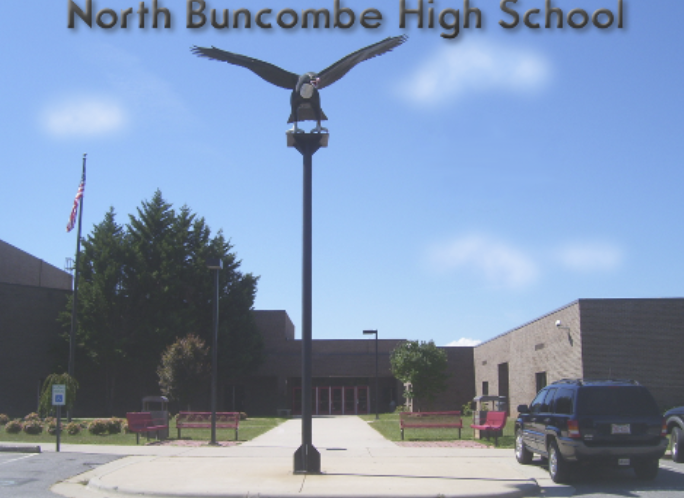 North Buncombe High School is located in the town of Weaverville, a rural mountain community approximately ten miles north of Asheville in northern Buncombe County. The school community is in a rural-residential setting with a diverse population represented by a broad range of socio-economic backgrounds in professional, high tech., blue collar, and farming careers. The North Buncombe district includes one high school, one middle school, three elementary schools, one primary school, and one intermediate (5th & 6th grade) school.

Buncombe County consists of two school systems. Buncombe County Schools is the public school system that serves the entire school system for the County. Asheville City Schools serves the city of Asheville. In addition, there are numerous private schools such as Carolina Day, Christ School, Asheville School, and there is even a private school for girls in middle school called Hanger Hall. The Buncombe County School District is comprised of six comprehensive high schools (grades 9-12), seven middle schools, 23 elementary school, one middle college, one alternative, and career education center for vocational students and four special needs schools, making it the eighth largest school district in the state. It is ranked as being number 76 as far as funded school systems. In contrast Asheville City with its tax base ranks number two. The average daily membership is approximately 25,175 students. Buncombe County School's employees 3600 full time employees: 1000 certified, 1760 classified, and over 39% of the teachers have earned graduate degrees. The total budget of Buncombe County Schools is 188 million dollars with an average per pupil expenditure of approximately $6600. The school year is comprised of two semesters with 180 days a year. Buncombe County has three colleges Mars Hill, UNCA, Warren Wilson and Montreat College.

BUNCOMBE COUNTY SCHOOL'S BOARD OF EDUCATION

There are seven members of the Board of Education who are elected to serve 4-year terms. One candidate is elected from each of the six districts and one at-large. Candidates are elected on a nonpartisan basis. Voters in each district vote for candidates from all districts and for the at-large candidate. The Superintendent is appointed by the Board and serves as secretary to the Board.

Each board member must fulfill the legal requirement to receive a minimum of 12 hours of training annually. All board members must receive a minimum of two hours of ethics education within 12 months after initial election or appointment to office and again within 12 months after each subsequent election or appointment to office. This education must address the laws and principles that govern conflicts of interest and ethical standards for local government officials. The superintendent shall maintain records verifying that each board member has participated in the required ethics education. The ethics education required under this paragraph may be counted towards the annual 12-hour training requirement. Unless otherwise approved by the board, such training must be provided by the following entities: the school system, the North Carolina School Boards Association, the National School Boards Association, the School of Government or the Department of Public Instruction. If a board member wishes to receive training credit or be reimbursed for attending training offered by another entity, he or she must obtain approval from the board. Funds for participation will be budgeted annually, and reimbursement for expenses will be made in accordance with law and applicable board policy.

Regular Board meetings are scheduled for the first Thursday of each month except in an election year. In this case, the regular December meeting will be held on the first Monday of the month. Meetings begin with a closed session that typically starts at 5:30 p.m., and the general session begins at 6:30 p.m.